On September 18, 2015, the judges and staff of the CBCA said goodbye to Andrea Lewis upon her retirement after 24 years of Federal government service. Ms. Lewis started her government career in 1991 with the Department of the Interior Bureau of Mines. She remained with the Department of the Interior for 16 years, at the National Park Service, the Office of Hearings and Appeals, and finally, from 1999 until 2007, the Interior Board of Contract Appeals. In 2007, Andrea came from the Interior Board of Contract Appeals, along with Judge Candida Steel, to the CBCA upon its inception.

After a career spanning 40 years, including 15 years of distinguished Federal service, Judge Candida S. Steel has retired. On September 10, the judges and staff of the CBCA, and her family, friends, and colleagues gathered to pay tribute and celebrate this occasion.

Judge Steel was born in Mount Kisco, New York. Upon completing her Bachelor’s degree in History at Northwestern University in 1971, she became a secretary and research assistant at the White House in Washington, D.C. She went on to serve as a legal assistant for the firm of Kirkland, Ellis & Rowe from 1974 to 1976. While there she earned her J.D. from Catholic University, graduating in 1977, having served on the law review.

Away from the bench, Judge Steel is a member of the Choral Arts Society of Washington and judge of the Center for Civic Education’s “We the People, the Citizen and the Constitution” for high school students.

The Board welcomes Mr. Terrius Greene and Mr. Eric Herendeen who have been selected to serve one-year appointments as Honors Attorneys for 2015-16. Both Mr. Greene and Mr. Herendeen return to the Board after previously working as legal interns and then as law clerks at the Board during their time in law school.

Mr. Greene is a 2015 graduate of the Howard University School of Law, where he was a Research Assistant to Professor Reginald L. Robinson and member of the Howard Public Interest Law Society. Prior to earning his JD, Mr. Greene served three years as a contracts and grants Program Assistant managing traffic safety grants funded by the National Highway Traffic Safety Administration.

Mr. Herendeen is a 2015 graduate of the George Washington University Law School. While in law school, Mr. Herendeen served as Online and Administrative Editor of the George Washington International Law Review. He also completed internships at the International Association of Fire Fighters, focusing on employment and labor law issues, and the Office of Federal Procurement Policy, where he worked on projects for the FedRamp program and a legislative proposal for an industry advisory board initiative.

The CBCA judges and staff recently gathered to honor and celebrate the retirement of Judge James L. Stern. Culminating more than 40 years of service as a government lawyer and judge, Judge Stern was joined by his family, friends and colleagues in commemoration of his esteemed career.

Judge Stern was born in Albany, NY in 1948. He obtained his Bachelor’s degree from Sienna College before graduating with honors from Adelphi University’s M.B.A. program in 1971. He attended New York Law School, where he was the Associate Editor of the New York Law Review and graduated in 1974. After graduation, Judge Stern started his legal career working for the Office of General Counsel in the Department of the Navy from 1974 to 1981. He served as the Deputy Assistant General Counsel for Acquisition during his last three years there. In 1983 he received an honorable discharge as a captain from the U.S. Army Reserve.

Now retired, Judge Stern looks forward to moving closer to his eight grandchildren and having more time to enjoy driving his Corvettes. The CBCA thanks Judge Stern for his dedicated service and wishes him all the best.

CBCA Judges Network with Members of the Government Contracts Bar

On July 9, the Boards of Contract Appeals Bar Association held its annual summer social in honor of the judges of the boards of contract appeals. CBCA Judges Harold D. Lester, Jr., and Richard C. Walters participated in “speed networking” with attendees, which provided them an opportunity to discuss practical issues in an informal setting. CBCA Chairman Stephen M. Daniels and Judge Marian E. Sullivan were also in attendance, along with CBCA Chief Counsel J. Gregory Parks, Attorney-Examiner Bryan Byrd and the CBCA’s summer law clerk class.

On June 10, CBCA Judges Patricia J. Sheridan, Richard C. Walters, and Anthony S. Borwick (Ret.), along with judges from the Armed Services Board of Contract Appeals, the Federal Aviation Administration’s Office of Dispute Resolution for Acquisition, and the Court of Federal Claims, participated in the American Bar Association, Public Contract Law Section, Contract Claims and Disputes Resolution Committee’s program entitled “ADR at the Courts and Boards.” Judges Sheridan and Walters played the roles of the government’s and contractor’s attorney, respectively, and Judge Borwick, via teleconference from California, played the role of the contracting officer in a dispute involving an alleged differing site condition. 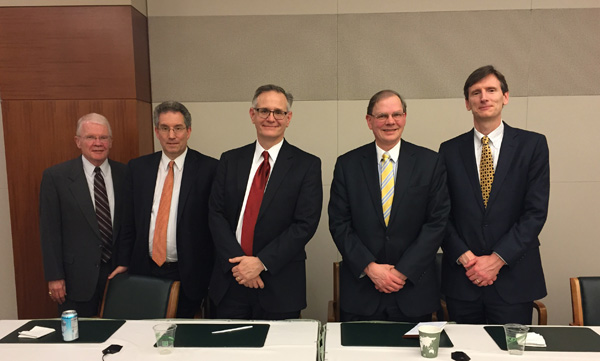 The judges panel included, pictured from left to right: Judge Thomas C. Wheeler of the U.S. Court of Federal Claims, Judge Alan R. Caramella of the Postal Service Board of Contract Appeals, Judge John Dietrich of the FAA Office of Dispute Resolution for Acquisition, Judge Harold C. “Chuck” Kullberg of the CBCA, and Judge Michael O'Connell of the Armed Services Board of Contract Appeals.

On April 8th, Judges Harold C. “Chuck” Kullberg and Jonathan D. Zischkau participated in the American Bar Association's Public Contract Law Section, Contract Claims and Disputes Resolution Committee, “Ask the Judges” roundtable discussion covering all aspects of claims practice before the Boards of Contract Appeals. Judge Zischkau served as co-moderator of the panel with Judge Reba A. Page from the Armed Services Board of Contract Appeals (ASBCA). Judge Kullberg served on the panel with judges from the ASBCA, the Court of Federal Claims, the Postal Service Board of Contract Appeals, and the Federal Aviation Administration Office of Dispute Resolution for Acquisition. 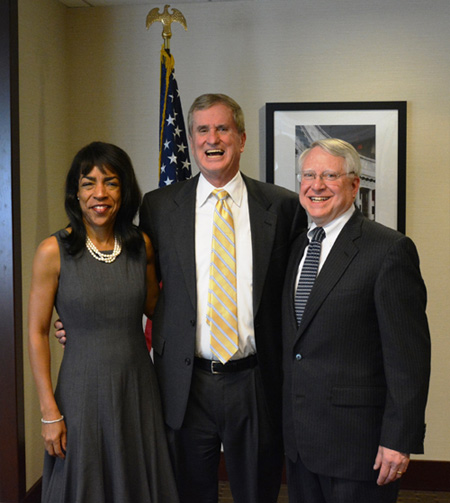 The judges and staff of the CBCA, along with family, friends and colleagues from the bar, bid warmhearted farewell on April 3rd to Judge R. Anthony “Tony” McCann upon the occasion of his retirement after 45 years of Federal service.

Judge McCann was born in Flushing, New York in 1944. He earned a B.A. degree from LeMoyne College in Syracuse, New York in 1966, and a Juris Doctor from Georgetown University in 1973. While at Georgetown he served as Editor of the American Criminal Law Review. From 1966 to 1969 he served as a commissioned officer in the United States Navy, later serving the Navy as a civilian trial attorney in the Navy General Counsel’s Litigation Office from 1973 to 1982. Between 1982 and 1997, Tony went on to serve as a trial attorney in the Commercial Litigation Branch of the Civil Division at the Department of Justice; as Associate Counsel for Litigation at Naval Facilities Engineering Command; and as Deputy Director of the Navy Litigation Office. In 1997 he was appointed an Administrative Law Judge in the Social Security Administration. He was subsequently appointed to the Department of Energy Board of Contract Appeals in 1998. Judge McCann became one of the original judges of the Civilian Board of Contract Appeals upon its creation on January 6, 2007. He served the CBCA with distinction until his retirement on April 3, 2015.

On April 2nd, Vice Chair, Judge Jeri K. Somers judged the final round of the McKenna Long & Aldridge “Gilbert A. Cuneo” Government Contracts Moot Court Competition at the George Washington University Law School. Judge Somers’ co-panelists were Judge Marian Blank Horn of the Court of Federal Claims and Judge Richard Shackleford, Vice Chair of the Armed Services Board of Contract Appeals. Leading up to the final round, on March 28th, Mr. Bryan M. Byrd, CBCA Attorney-Examiner, judged part of the advancement round of the competition. The problem involved the applicability of the Severin doctrine to a subcontractor’s pass-through claim and the Forfeiture of Fraudulent Claims Act. 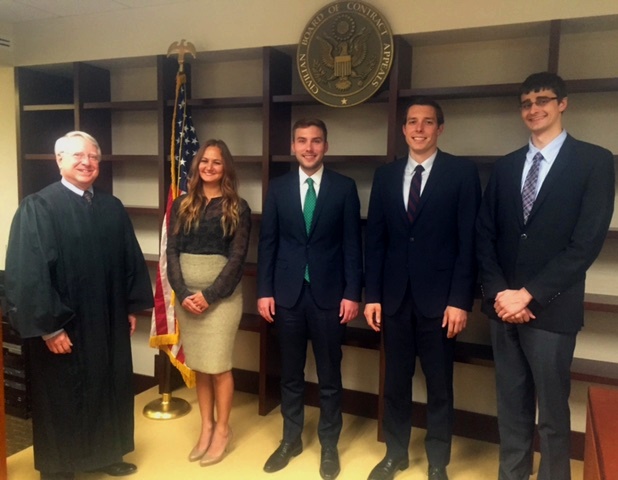 The CBCA is proud to announce the selection of its Summer 2015 law clerk class. This year's class was selected from a competitive pool of high quality candidates from law schools in the area and around the nation. Joining the CBCA for the summer will be: Ms. Dima Budron of American University Washington College of Law, who is the former President of Allied Design-Build, Inc.; Mr. Douglas Eden of George Washington University Law School, who is a member of the Federal Circuit Bar Journal; Mr. Kevin Misener of George Mason University School of Law, who is Senior Notes Editor of the National Security Law Journal; and Mr. Collin Phillips of George Washington University Law School who comes to the Board after serving with the Department of State's Fulbright Program in South Africa.

Recently, on March 24th, at the request of the George Washington University Law School, the CBCA presented several panel discussions to advise first-year law students about how to have a successful summer as a legal intern for the school’s Inns of Court Program. CBCA Vice Chair, Judge Jeri K. Somers and Judges Catherine B. Hyatt, Patricia J. Sheridan, Marian E. Sullivan, and Harold “Harv” D. Lester, Jr., answered questions from the attentive audiences alongside former CBCA legal interns who are now in practice. CBCA Chief Counsel J. Gregory Parks, Attorney-Examiner Bryan M. Byrd, and Honors Attorney Sean K. Griffin moderated the panels and provided the students the benefit of their experience as well. 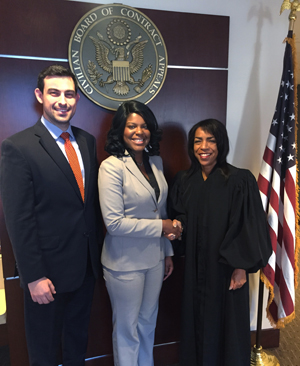 Mr. Sean Griffin and Ms. Giovanna Jean-Baptiste have been selected from a very competitive field to serve as Honors Attorneys with the Civilian Board of Contract Appeals for 2015. Honors Attorneys serve one-year appointments with the Board, performing duties similar to judicial law clerks. Mr. Griffin is a 2014 graduate of the American University, Washington College of Law, where he served on the Administrative Law Review and with the Community and Economic Development Law Clinic. Mr. Griffin previously served as both a legal intern and summer law clerk with the CBCA. Ms. Jean-Baptiste is a 2013 graduate of Howard University Law School, where she served as Executive Notes and Comments Editor of the Human Rights and Globalization Law Review and as an officer with the Student Bar Association. She previously clerked for the Honorable Maurice A. Ross of the Superior Court of the District of Columbia.