The United States Civilian Board of Contract Appeals (CBCA) is pleased to announce the appointment of two new CBCA Board Judges, Mr. Harold D. Lester, Jr., and Ms. Marian E. Sullivan. Judges Lester and Sullivan were sworn in on Monday, July 14, 2014 by the Honorable Sharon Prost, Chief Judge of the United States Court of Appeals for the Federal Circuit, in an investiture ceremony held at the CBCA's offices. 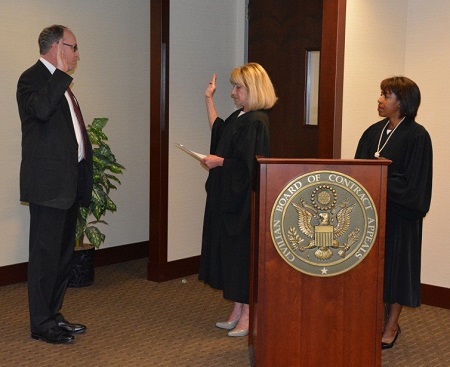 Judge Lester comes to the Board from private practice where he advised clients on a range of Government contracts matters and assisted in complex contract dispute litigation. Before assuming that position, Judge Lester served for over 20 years with the Commercial Litigation Branch, Civil Division, of the United States Department of Justice, first as a trial attorney and then, from 1999 to 2013, as an Assistant Branch Director. Judge Lester received his J.D. from Washington & Lee University School of Law in 1988, where he served as Executive Editor of the Washington & Lee Law Review, and his B.A. from Furman University in 1984, where he majored in Economics and Business Administration. 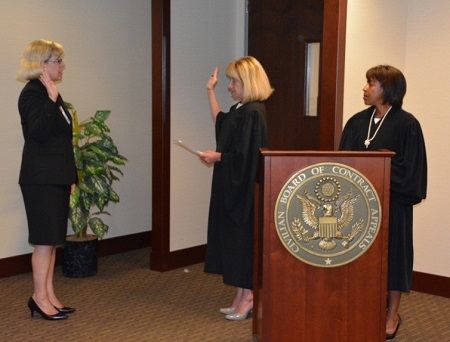 Judge Sullivan comes to the Board as an accomplished trial attorney with 18 years of federal litigation experience, including almost 16 years with the Civil Division of the Department of Justice. Most recently, Judge Sullivan served as Assistant Director of the Commercial Litigation Branch, where she handled complex civil litigation matters, large bid protests, and government takings cases before the United States Court of Appeals for the Federal Circuit and the United States Court of Federal Claims. Judge Sullivan received her J.D. in 1995 from Georgetown University Law Center and her B.A. in 1990 from Stanford University, where she majored in Political Science. 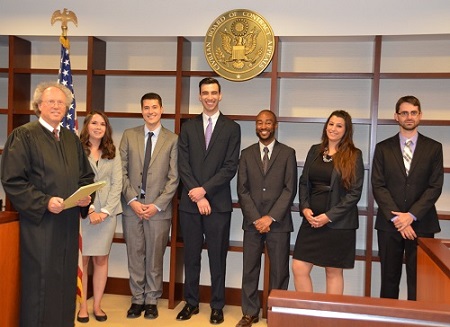 At left, the CBCA's 2014 Summer law clerks smile for the camera after being sworn in as Federal employees by CBCA Judge Goodman. 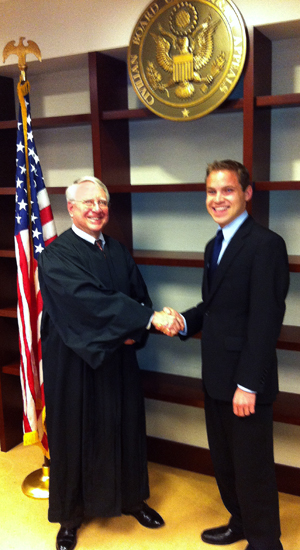 The Board is pleased to announce that Mr. Bryan M. Byrd has joined the staff of the Board's Chief Counsel as an Attorney-Examiner. Mr. Byrd served as the Board's first Honors Attorney from November 2013 until he was appointed to this position on April 6, 2014. Mr. Byrd is a 2013 honors graduate from George Washington University Law School where he concentrated in government procurement and international litigation and served as senior notes editor of the Federal Circuit Bar Journal. Mr. Byrd was admitted to the practice of law by the Commonwealth of Virginia in October 2013.

At left, CBCA Chairman, Judge Stephen Daniels congratulates Mr. Byrd after swearing him in as a Federal employee.